Just the other day, I was minding my own business, working away quietly, when in the distance I heard a rumbling sound barreling towards me. It was a sunny day so there were no storms around, just this rumbling sound coming closer, and closer. Baffled, I peered out my office window and saw nothing. Seconds later, the 2014 Lamborghini Huracan rolled up before me in all its glory and the sound spitting from the quad exhausts was so loud, my heart skipped a beat.

2014 Lamborghini Huracan has looks to kill

There are few cars in the world that have a hypnotic effect on those who set their eyes on it and the Lamborghini Huracan is one of them. You simply can’t help but ogle and drool at the beauty of this car. Its low, predatory stance and sharply defined features lock you in and if your’e not careful, will hold your gaze for eternity and possibly turn you into stone.

The face of the Huracan is dominated by large reptilian-like air intakes and the LED headlights are reminiscent of a snake ready to strike on command. Stepping inside the Lamborghini Huracan is like stepping into a fighter jet, with flickable switch gear and viper green sports seats that make you feel like you going to war. Everything about the the Lamborghini Huracan just screams FAST! And it is…

Obviously, there was no way I was going to drive the Huracan, I’m just not man enough, or rich enough, so I was quite happy to experience my first ride in a Lambo in the passenger seat. Out on the road, the Lamborghini Huracan seemed out of place. Congested city roads is no place for a car of this caliber.

Other motorists quickly fell under the spell of the Huracan and just couldn’t help themselves from stopping in the middle of traffic to get a snapshot of the car. The attention the Huracan generates on the road is perplexing and fascinating, people just love supercars I guess, and what’s not to love about the Lamborghini Huracan? 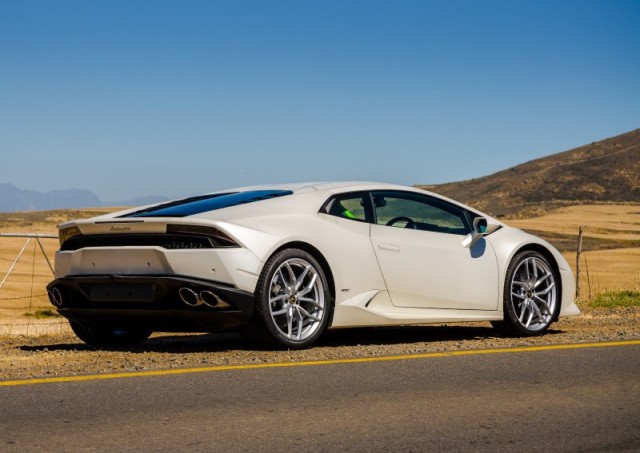 With a stiff suspension setup geared for track driving, the drive within the city was rather bumpy and every little imperfection in the road surface could be felt. But who cares, this is a Lamborghini Huracan right? On the open road, the Huracan comes to life and the sound of that 5.2-litre V10 howling away behind you is just magical. With thumping 448 kW of power and 560 Nm of torque on command, you can just imagine what’s possible on a quiet country road.

Acceleration in the Lamborghini Huracan is ridiculously brutal with the help of a 7-speed dual clutch transmission that sends power to the large 20-inch alloy wheels. The 0-100 km/h sprint is claimed at 3.2 seconds and if you have the nerve to press on even faster, the beast that is the Huracan will take you right up to 325 km/h without even batting an eyelid.

I got back to the office with my heart in my throat and a big smile on my face, my work was done for the day. 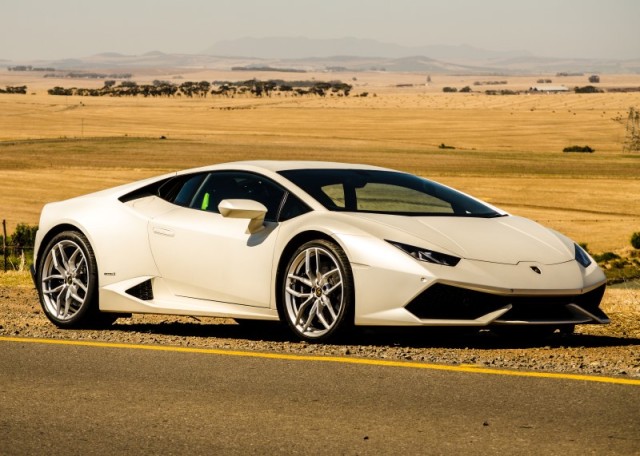 Just the other day, out of the blue, a friend hooted outside my house. I opened my front door and a sexy blue 2014 VW Golf 7 R, the most powerful production Golf yet, stood before me for the first time. ‘Can I drive?’ I asked. The answer from the driver’s seat was a powerful ‘No, just get in’. I smiled and happily headed for the passenger seat. I had to ask.

The new 2014 VW Golf 7 R was literally launched in South Africa a few weeks ago, so this was expected to be a very special experience, even though I wouldn’t get my hands on that flat-bottomed steering wheel. You can’t have everything, you know.

I stepped in and was instantly overwhelmed by a smart, comfy interior bathed in blue ambient lighting. Unlike anything I had ever seen before, this was the highly-anticipated 2014 VW Golf 7 R, in all its glory before my eyes. The leather sport seats felt remarkably genuine and the clean surfaces around me refreshed my senses. The lights and gadgetry however, hinted at something a little more sinister lurking beneath its skin. Then, I heard a distinct rumble.

The uprated 2-litre TSI four-cylinder turbo petrol engine came to life, growling under its breath. Bred with 206kW of pure muscle available from 5500rpm and 380Nm of vicious torque dripping from its fangs at 1800rpm, the 2014 VW Golf 7 R is a hungry wolf wrapped in wool.

The hunt begins with a bang

In Normal Mode, the 2014 VW Golf 7 R seemed to tolerate urban roads with utter confidence, but I could sense a certain frustration within this beast, possibly a longing to stretch its legs and hunt on the open road. At standstill and with an empty highway stretched out before us, my good friend switched into Sport Mode and suddenly the atmosphere dropped a gear. In full-blown hunt mode, the wolf piped up quickly and with eyes locked on the clock, my heart rate felt like it doubled instantly as I took a deep breath. About six intense seconds later we were clocking 120km/h and I finally had a chance to grab my breath, my body tingling all over.

VW claims 0-100km/h in 4.9 seconds which is pretty fast for a layman like me, but as hungry as it is for speed, the new VW Golf 7 R isn’t as thirsty as you’d think. It’s said to average at about 7-litres/100km which is excellent considering what it thumps out on command and only expels 159g of CO2 every kilometer. Not bad, hey.

The new 2014 VW Golf 7 R delivered me home safely but I was reluctant to get out. I just didn’t want to. ‘Can I drive?’, I asked again, pushing my luck once more. My friend gave me a devilish laugh and replied, ‘No, get out’. I laughed and about six seconds later, the sexy blue 2014 VW Golf 7 R was gone, and I was left to ponder on my dreams, in silence.